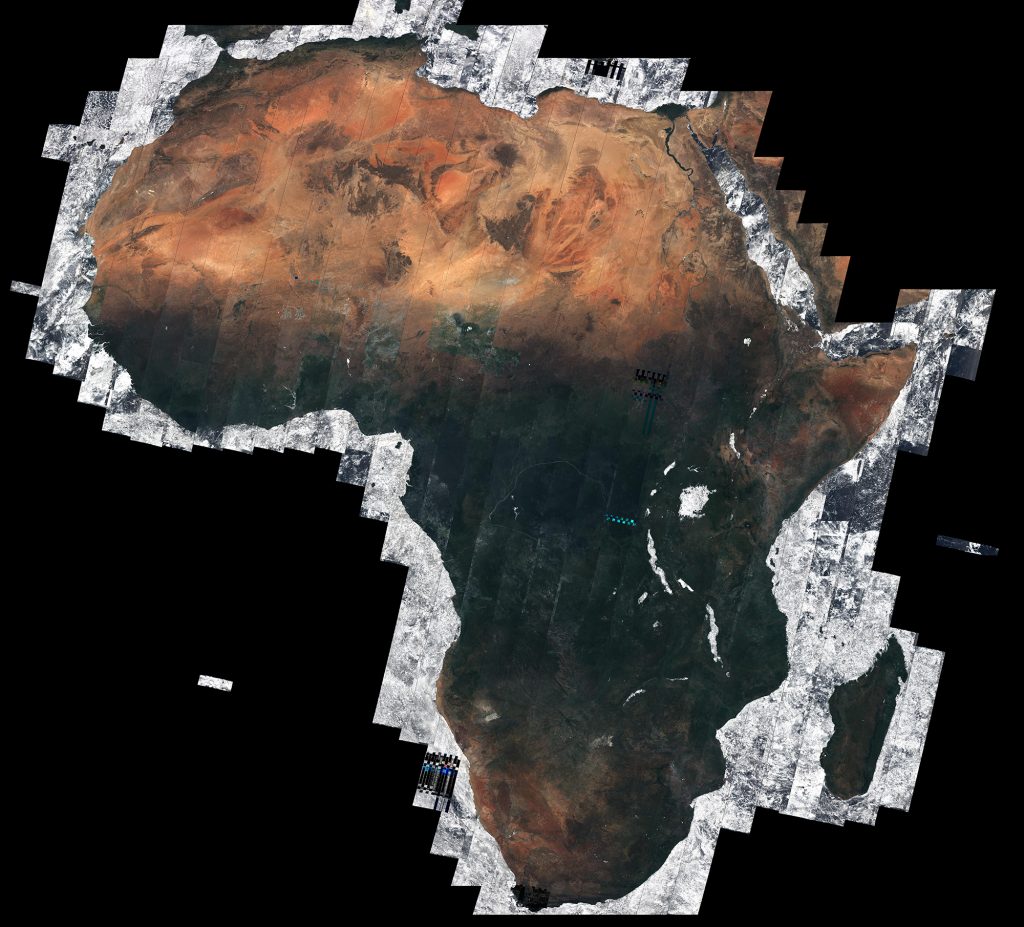 Being the cradle of humankind, it should come as no surprise that some of our greatest scientific breakthroughs and developments in mathematics, medicine, architecture and astronomy can all be traced back to Africa. The oldest record of technological development we have (which even pre-dates the existence of humans by 700,000 years) is represented by the 3.3 million year old stone tools unearthed close to Lake Turkana in Kenya. Fast-forward 3.27 million years and mathematics textbooks were being developed in Egypt, by 8000 BCE hugely complex numerical systems had been devised in modern-day Democratic Republic of Congo and by 3200 BCE the Dogon people of Mali intimately understood the workings of the Sirius star system, the fact that the earth revolved around the sun and the spiral shape of our galaxy. The Eurocentric view of scientific progress, moulded by the achievements of the Scientific Revolution, the Enlightenment, and the first three industrial revolutions, often forgets to “cite its sources” and acknowledge the millennia of African scientific understanding that came before it. Now, although still grappling with the impact of centuries of colonisation, exploitation and oppression, Africa rightly stands to contribute to the fourth industrial revolution in its own, gigantic way.

Africa is one of the world’s most rapidly developing regions; according to current estimates, its population of 1.3 billion people will double by 2050 and, in parallel, many of its economies are expected to become important powerhouses of global business, innovation and trade. Along with South Africa, the most economically developed country on the continent, many other countries in the sub-Saharan African region are expected to develop rapidly in the coming decades. So much so that the IMF recently upgraded Botswana, Ghana, Kenya, Mozambique, Nigeria, Tanzania, Uganda and Zambia to the rank of “emerging markets.” In fact, in 2018, six of the ten fastest growing economies in the world were African. These rapidly growing populations and economies will undoubtedly require up-to-date and timely geospatial information to help them monitor the status of their natural resources, their economic activities and resulting environmental impacts.

As Africa’s new era of progress begins to unfold, it has set its sights high when it comes to space. The African Union explicitly state in their 2063 Agenda that by 2063, they aspire for Africa to be “A major social, political and economic force in the world, with her rightful share of the global commons – land, oceans and space”. Space based technologies, Earth Observation (EO) in particular, hold huge potential in helping Africa acquire the data it needs to guide its development, stimulate its scientific collaboration, and reach its Sustainable Development Goals (SDGs). In its African Space Strategy, published in 2017, the African Union recognises the need to make best use of space assets in monitoring and implementing national to continental scale sustainable development policies. The European Commission also acknowledges the importance of space technologies in contributing to Africa’s development in its publication entitled “Towards a Comprehensive Strategy with Africa”. The Commission even went as far as stating that “The open and free data provided by the EU Space programmes can boost a nascent African space private sector, enabling start-ups and small and medium-sized enterprises (SMEs) to develop local innovative solutions and services. The Earth observation monitoring of natural resources, of land use, of inland water resources, and of marine and coastal ecosystems can underpin policy and decision-making in Africa.” These high-level commitments to the future widespread use of EO across Africa are a testament to the utility of the technology as well as the promise it holds in helping the region emerge as a major global power.

One may be inclined to think EO is something new for Africa, given the current surge in excitement regarding its potential for the region, however, EO has already proven its efficacy in helping Africa address some of its problems. For instance, the European Space Agency (ESA) funded TIGER initiative began in 2002, in response to the urgent need to promote the use of EO for improved Integrated Water Resources Management in Africa as stressed by the Johannesburg World Summit on Sustainable Development (WSSD). The overall objective of the initiative was to fill in existing information gaps of utmost importance for the effective and sustainable management of water resources and, thus, help mitigate the widespread water scarcity in Africa. After over 18 years of existence, the TIGER initiative has established and supported capacity building activities and development projects involving 80% of the African countries and aided more than 150 African water authorities and research institutes in maintaining the safety and security of their water supplies.

As a result of the increased focus on Africa’s economic and technological development, in recent years the African space technology scene has welcomed numerous exciting projects and initiatives that hold great promise in holistically driving forward progress across the continent. One such initiative, Digital Earth Africa, aims to use EO data to help societies remain informed about their changing landscapes, empower policy makers to make better informed decisions, build resilience against ongoing challenges and stimulate economies. Digital Earth Africa’s solution is to create an open data cube for all of Africa, whereby analysis-ready data, coupled with cloud infrastructure and opensource technology will allow for algorithms to be rapidly developed and, thus, for insights addressing social, environmental, and economic challenges to be generated.  Encompassing a land area over 30 million square kilometres, Digital Earth Africa will be the world’s largest open data cube and some of its estimated impacts in the continent are huge:

ESA have also recently funded a new project, the EO Africa R&D Facility, which will address the EO related R&D issues and information requirements relevant for achieving the SDGs. The initiative will do so by launching research calls, leveraging modern cloud computing development tools, and supporting a range of networking actions in close collaboration with both the African and European research communities. The EO Africa R&D Facility aims to prepare the ground for the pre-operational developments of more specific information solutions required by individual development assistance projects addressed in the Global Development Assistance (GDA) program. The GDA is an ESA initiative funded under the Earth Watch programme in close collaboration with international financial institutions such as the World Bank and will run from 2020 to 2024 with an initial investment of €30 million.

These large initiatives aim to fortify Africa’s EO R&I activities and provide the region with both the capacity and impetus to drive forward the continent’s social, economic and scientific development. As shown within the European Copernicus programme, continuous EO research activities, developing local expertise, and innovative capacities are a vital complement to operational programmes, and will aid in underpinning the long-term evolution and sustainability of EO services and communities in Africa.

Another major joint initiative from EU and ESA is the Global Monitoring for Environment and Security (GMES) programme which aims to provide sustainable, reliable and timely services related to environmental and security issues. Based primarily on EO data, it analyses, prepares and makes available environmental and security-related information via enhanced (or new) services to end-users who need it. The initiative reached beyond Europe’s borders in 2007 when the African Union joined forces with the EU and ESA to launch GMES and Africa. GMES and Africa’s first phase consists of two main services: (i) a natural and water resources service and (ii) a marine and coastal service. The overall objectives of GMES and Africa aim to maintain long-term EU-Africa cooperation on space science and technology, enable the two continents to jointly solve and address global challenges and promote sustainable development.

Steady national level EO sectorial developments have also been ongoing since the late 90s and by most metrics, seem to be accelerating quite rapidly. As the beginning of 2021 draws to a close, 11 African countries (namely Algeria, Angola, Egypt, Ethiopia, Ghana, Kenya, Morocco, Nigeria, Rwanda, South Africa and Sudan) will have launched a total of 41 satellites, with 13 of these being for EO purposes. A 2019 update of a survey conducted by the African Association of Remote Sensing of the Environment (AARSE) also found that an increasing number of private sector EO companies are popping up across the continent. It is believed that around 229 private EO and Geo-Information Science companies are now operating across 25 African nations, with the number of people employed in the private sector jumping by 66% between 2016 and 2019 and, now, totalling 4,109. Overall, the projected growth of the space industry is very strong; according to the African space industry Annual Report for 2019, the African space market generates around $7 billion USD annually and is likely to grow by 40% within 5 years, exceeding $10 billion USD by 2024.

It is clear that the opportunities for European EO service providers and research institutes in Africa are huge and only continuing to grow. The efforts undertaken by intergovernmental and national stakeholders towards developing Africa’s EO capacities now provide one of the world’s most fertile innovation and collaboration ecosystems. Horizon 2020 projects such as GEO-CRADLE, which furthered knowledge and facilitated cooperation between EO stakeholders in North-Africa, and AfriCultuRES, which contributes to fortify food security through remote sensing, exemplify just some of the innovative actions Europe is driving in the region.

Reflecting upon our own project, within e-shape Pilot 1.3 – Vegetation-Index Crop-Insurance in Ethiopia focuses on developing an NDVI-based crop insurance product primarily covering drought impacts. This will allow farmers in Ethiopia to better map their crop production and access high-quality agri-insurance, helping them maintain food production and protect their livelihoods.

Given that many parts of Africa are still grappling with numerous environmental, economic and societal issues, some may be surprised to learn such efforts and funding are being put behind the African EO sector and space industry in general. However, once it is understood that these efforts are being undertaken precisely to address the ongoing food shortages, poverty related issues and declining natural resources, it becomes clear that EO may hold the key for Africa to overcome its problems, once and for all.

This article is the first in a series of articles focusing on EO opportunities in different geographic regions all around the world. Keep an eye out for more insights coming soon.