A far-reaching pandemic – COVID-19’s impact on sectors where EO services could make a difference
Would your research benefit from taking a good look at our planet? Explore Earth Observation funding opportunities with OCRE 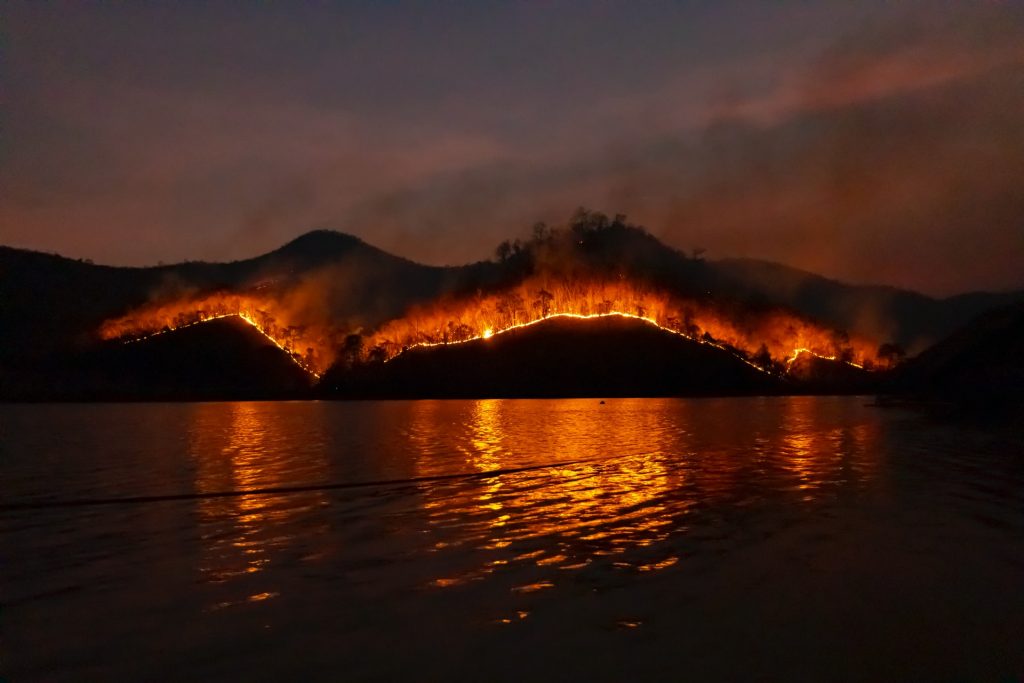 Although fires are a common component of healthy ecosystems, extreme wildfires, on the other hand, pose a serious threat to critical infrastructure and human lives. Among their many consequences, wildfires lead to environmental degradation and air quality deterioration, loss of property, crops, and other vital resources. The losses incurred during the 2019-2020 wildfires prove that there is still a lot to be done to protect ecosystems and, ultimately, ourselves against this increasing threat. In their efforts to identify the best early detection and management tools, decision-makers and practitioners have turned to geoinformatics. Imaging the Earth with daily regularity, Satellite Earth Observation (EO) shows great potential for addressing current needs and trends as we shall try to demonstrate further.

The latest reports on the 2020 wildfires account for 18.6 M ha charred in Australia, 3.9 M ha in the USA, and 315 K ha in Europe. Overall, reports reveal wildfires to be a significant threat to both human lives and the economy: for Europe, a recent report evaluates the yearly toll of forest fires at ~480 K ha, ~34 human lives claimed, and nearly €3 BN economic loss between 2000 and 2017; whereas the Australian economy will have to cope with a projected total cost of US$70 billion, not to mention the likely long term effects of air pollution and biodiversity loss – an estimated billion animals, and many more bats and insects, are likely to die as a result of lost habitat and food sources.

In Europe forecasts are equally stern as environmental and socio-economic losses due to wildfires are expected to increase as a result of rapid economic growth and escalating manifestations of climate change.

Scientists seem to agree that climate change and wildfires feed each other. In recent years, humanity has witnessed wildfires occur over an ever-widening geographical area, from the Arctic Circle and Siberia to the Amazon and Indonesia. Similarly, in Europe, unprecedented fires devastated Sweden (2018) and Siberia (2020) adding to the already common occurrences in the south. Drier seasons, heatwaves, and high winds increase the risk of wildfires causing them to become larger, propagate faster, and ultimately amount to more damaging outputs. Besides their immediate impact, forest fires contribute to air pollution affecting not only human health but also climate change trends – a recent study seems to suggest that wildfires might be contributing 20% of the yearly greenhouse gas emissions, and so, the cycle continues.

What can be done? – Wildfire Management

Wildfire Management entails preparedness and crisis management. Preparedness falls mainly under the responsibility of the civil protection authorities who are charged with regularly monitoring potential risks to determine any likelihood of occurrence and impact. Crisis management, on the other hand, addresses ongoing fire incidents in real-time and involves all actions related to assessment, mitigation, and recovery, the result of a series of consultations and decision making processes occurring within and between a variety of stakeholders. Safe to say that for these authorities, timely and reliable data is vital, bearing real weight every step of the way. For instance, in the civil protection authorities’efforts to produce detailed population evacuation plans or decide on alternative solutions during circumstances threatening the communications infrastructure, early detection and accurate assessment of fire intensity and rate of spread are pivotal.

Recent developments in Earth Observation and artificial intelligence (AI) could prove transformative for the sector enabling authorities to 1) regularly monitor vast (including uninhabited) areas and/or 2) adapt any existing awareness, preparedness, and management plans to the specific realities of the risk area as derived based on satellite, aerial, and in situ data which provide insight into the soil a series of parameters such as moisture and erosion, land cover/use, change detection, deforestation, and historical data, fuel type identification, vegetation indices, and surface temperature, etc. Let us then get acquainted with some of the available options and opportunities!

Wildfire management research and innovation-wise, some European Union (EU) financed projects (Horizon 2020) stand out: beAWARE (one of its pilot activities aims to support decision making during fire incidents by using, amongst other tools, a Geographic Information System, weather forecast systems, disaster risk management, and other), ANYWHERE (seeks to establish a pan-European multi-hazard platform to enable the identification of critical situations which could lead to loss of life and economic damages in a number of geographic regions), DISARM (focuses on developing an integrated approach in preventing and mitigating the adverse impacts of droughts and wildfires) and the newly signed S2IGI (strives to establish an end-to-end fire management Decision Support System). In the same spirit, centres of excellence were funded, among which the Centre of EO research and satellite remote sensing (BEYOND) is of relevance as it operates FireHub – an open online service providing real-time fire monitoring for the benefit of both public and authorised users in order to facilitate early warnings and decision making, whilst also addressing Burnt Scar Mapping needs at various spatial resolutions.

Additionally, numerous exploratory studies have been carried out using AI and EO in forecasting, identifying, and monitoring wildfires and their immediate and long term consequences (1, 2, 3) revealing in the process some of the capabilities and limitations of the existing tools. One such study seems to suggest that near-real-time wildfire monitoring might become possible with the help of deep learning once constellations such as RADARSAT and SAR CubeSat start imaging the Earth on a daily and hourly basis.

As always, the presence and complexity of the private sector are great indicators of service maturity for commercial gain yet, for now, aside from a couple of large players selling high-resolution imagery, the offer remains fairly limited. Here, Planet deserves a special mention as one of the newest actors operating an in-house built satellite constellation which provides high-resolution imagery in rapid revisit times, and Capella Space who began, August 30th, launching a series of commercial SAR satellites essential in acquiring data for disaster management such as wildfires.

On the service-development side, next to larger companies with long-standing presence, young start-ups have entered the scene such as OroraTech – provides dedicated wildfire management solutions which it aims to improve by launching, next year, an in-house developed satellite constellation; and ConstellR – operates via a dedicated user interface offering analytics-ready georeferenced land surface temperature data based on thermal infrared data. This growing diversification is a clear indicator of the potential for development EO data could unlock in key sectors such as wildfire management.

To conclude, as wildfires occur over an ever-widening geographical area their threat is a call to action for us all. Driven by the users’ need for improved early detection and management tools, dedicated Earth Observation and AI capabilities are expected to diversify and refine as anticipated by the recently announced Copernicus EMS – Planet collaboration. Having set ambitious goals for itself: “reduce the incidence and extent of forest fires” and “boost the EU’s ability to predict and manage environmental disasters”, the EC has launched a wildfire management dedicated funding package – € 75 M.  Also, given its great potential for commercial gain, the “disaster crisis management market” is gradually building interest among private actors. As in all other EO-reliant sectors, new satellite systems and technologies such as CubeSats, nanosats or other new satellite constellations and platforms have the potential to become game-changers of both upstream and downstream operations so do make sure to keep an eye on our website as we will continue to monitor the market.

This article is based on contributions from Dr. Haris Kontoes (European Centre of Excellence BEYOND, National Observatory of Athens).