Ask someone to think of an example of Copernicus data, and they will probably come up with a colour image of the sort produced by Sentinel 2, or maybe a Sentinel-1 SAR image. Yet the capabilities of the Sentinel missions are much more diverse than commonly known; for instance, they are also monitoring land temperature and atmospheric gasses.

And then there is altimetry. Satellite radar altimeters, such as those carried by the Sentinel-3 and Sentinel-6 missions, are key tools in climate monitoring and weather forecasting, yet they are not as well-known as other satellites. So, what is altimetry, how is it used, and could it be applied more widely?

The basic concept of satellite altimetry is simple: a pulse of microwaves is sent from the satellite to the earth and the reflection is measured. The delay between emission and reception gives you the distance between the spacecraft and the surface, while the waveform of the return pulse gives an indication of surface roughness. Recent altimetry missions use SAR/Delay Doppler techniques to improve resolution. 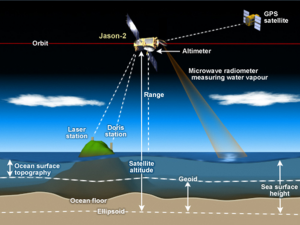 Of course, it’s not quite that easy; for this to work, the satellite’s orbit needs to be known with extreme precision, to within a few cm, which is more than currently possible using GNSS alone. Hence, the spacecraft needs to be tracked from the ground using a Precise Orbit Determination service. Also, since the return signal is very sensitive to atmospheric moisture, one needs to simultaneously measure this using a radiometer to derive corrections.

Moreover, the footprint of this pulse is relatively large, typically several km, meaning that altimetry is best suited for open-ocean monitoring but less so for land monitoring. The altimeter measures the sea height, which depends on factors such as water temperature, air pressure and ocean currents, while its waveform can be analysed to derive wave heights and surface wind speed. These are key inputs to weather forecasts, being used to initialise models and check their performance.

Since the launch of ERS-1 in 1991 there has always been at least one altimetry mission in orbit, resulting in a continuous series of observations which can be used to measure changes in sea levels over time. This makes altimetry a key tool for monitoring the effects climate change has on the oceans – the data shows a global increase of 3.2mm/year in mean sea level (with considerable regional variation) which has been accelerating in recent years.

But altimetry is not just about sea level measurements. The CryoSat misson, for instance, uses an enhanced altimeter known as SIRAL to measure the thickness of floating ice. As expected, this too is a key tool for monitoring climate change.

Over land, altimeter measurements are used in creating digital elevation models. There have also been investigations into how SAR altimetry can be used to measure biomass.

To apply altimetry more locally, it is possible to analyse the waveform of the return pulse to remove some of the effects of land, allowing measurements of sea height much closer to the shore. This branch is known as coastal altimetry and its resulting data is used as a virtual tide gauge; some of its practical applications including improved modelling of tides and storm surges as well as monitoring coastal currents. The same techniques can also be used to monitor the levels of rivers and lakes.

So far, the benefits of altimetry have mainly manifested high up the value chain: using it greatly improves forecasts and models but, for the time being, altimetry is not generally applied directly for end user applications. This is partly due to the sparsity of altimeter missions, and partly due to the perceived complexity of handling the data. There have, however, been some tantalising glimpses into possible user applications. One study looked at how fishing catches correlated with altimeter derived ocean currents.  Coastal currents also impact biodiversity and fishing. Altimetry has also been proposed for tracking river discharges and for reservoir monitoring.

What’s next for altimetry? A recent paper from the International Altimetry Team sets out key recommendations including making altimeter data available in Near Real Time, providing additional training to potential users, and ensuring the continuity of the altimeter data record into the future.

To this could be added an increased awareness by the wider EO community. Altimetry products are freely available through Copernicus, as well as from the Jason missions, and further altimetry missions (such as CRISTAL) can be anticipated. Initiatives such as the Radar Altimeter Database System (RADS) exist to provide harmonised datasets suitable for operational use. The EO community should be made more aware of these resources and encouraged to apply them to new applications.

So, will the next e-Shape pilot be powered by altimetry? Maybe it already is, indirectly, especially for applications around water body monitoring, coastal vulnerabilities, and climate change. So, if you are not already considering altimetry maybe you should be!

The opportunity and challenge of building a Planetary Digital Twin